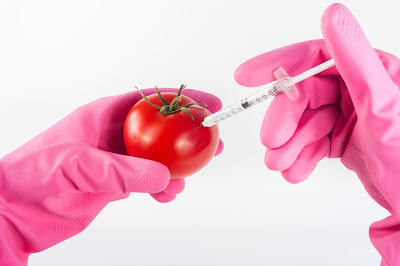 'Engineer' means construct according to a design: it's something humans do. The design and construction of DNA is chemical engineering: it uses computers, lab equipment, and a lot of fancy enzymes. Lately, the DNA inside a living cell can also be re-designed and re-constructed.

Sadly, all this DNA fiddling has now got so many different names that the basic artificial alteration of life is getting lost in the semantic clutter.

We started off with 'genetic engineering' when the engineered DNA formed a 'gene' (a protein-coding unit). This was followed by 'transgenesis, cisgenesis and intragenesis (depending on where the novel gene originated), and 'genetic modification' (because it sounds less scary). Recently, the Americans hit on the term 'bio-engineering' [1], and there are also anti-sense (back-to-front) genes which block the expression of right-way-round genes. So far, that's seven names just for sticking in an extra bit of DNA.

Then, things moved on with 'gene-editing', a.k.a. 'GM2.0' or 'new GM', which depending on the technique used, can be referred to as ZNF-1, ZNF-2, ZNF-3, TALENs, Meganucleases, CRISPR/Cas, CRISPR/Cas9, ODM, RTDS [2]. This got so complicated that they all got grouped together as New Breeding Techniques or NBTs, as a catch-all phrase for a plethora of molecular nuts and bolts to change life. If you're counting, that's some twenty names for DNA engineering.

GM Watch has drawn attention to the latest in-thing in DNA engineering, 'Site Directed Nuclease' techniques, or SDNs, which includes CRISPR, ZFNs and TALENs. SDNs use enzymes which chop up DNA in preparation for its reconstruction. Depending on the DNA outcome at the site of the break (random deletions and insertions, the addition of a small segment of DNA, or the addition of a large segment of new DNA), these are designated SDN1, SDN2, and SDN3. That's around twenty-four names (about double if you count the full name plus the abbreviations).

So, apart from being artificial changes forced into a living organism's DNA, what else do these 24ish DNA engineering methods have in common?

They all involve, for example, cells which have been forced to live unnaturally in culture, attacked by a vector (such as a metal particle or a plant pathogen) and persuaded to grow into plants. All these techniques are stressful for the plant and leave scars in the DNA and in the epigenome. The resulting sorry, abused specimens should, theoretically, be back-crossed with elite varieties for six generations to clear out 95% of the scars. This is time-consuming and expensive, and is generally not completed.

The epigenome refers to biochemical changes in the DNA which alter its function but not its structure... Such DNA-associated biochemical modifications are vital for normal, healthy functioning of the cell, but can be subject to disruptive 'epimutation' which can be far from healthy. Epigenetic changes are heritable.

The hub of the problem is that neither genes nor all the 'other' (once considered junk) DNA, nor the epigenetic elements act in isolation: they form one big orchestrated, coherent, networked whole.

Effects of the intended DNA change will ripple through the cell: effects of the five-plus percent of unintended scars which haven't been bred out will join the ripple.

And just think, successive, stacked DNA-engineering events, plus gene pollution, plus some of those multiple five-plus percent of scars from each event could mean you'll eventually be eating food containing artificial changes with some two dozen names.

Any one for a helping of GMMMMMMMMMO?

If you'd prefer to dine on something more natural, tell your government representatives NOW before it all gets out of control.