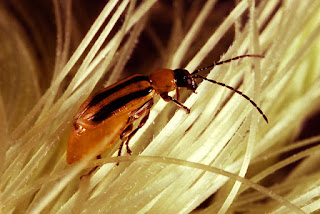 US maize farmers have an arsenal of chemical weapons to fight their enemy No.1. But it isn't winning them the war.

Root feeding damage leads to reduced uptake of nutrients and water by the plant and instability, especially in adverse weather conditions. Yield losses can be catastrophic: western corn rootworm isn't called the "billion-dollar bug" for nothing [1].

Scientists have already pin-pointed the problem: the elite maize varieties grown by almost all US farmers have no inherent resistance to the worm. American maize is high-yielding with uniform small-stature growth and synchronised flowering to suit mechanised management and the supply needs of the globalised market. Unfortunately, these characteristics are a result of its uniform genetics which don't include pest resistance. Coupled to monoculture and very limited crop rotation which would interrupt the pests' life cycle, susceptibility to feasting insects appears to be actively encouraged.

A team of scientists in the University of Illinois have been thinking outside the biotech-box and are working to "improve native resistance to western corn rootworm in maize, without using transgenics".

Accordingly, they've taken on the huge task of hunting through maize lines from all over the world to find native genomes which include insect resistance. Importantly, the 'Germplasm Enhancement of Maize" (GEM) project isn't looking for silver-bullet genes: the scientists recognise that pest resistance is too complex a trait to boil down to a single gene. They're trying to identify regions in the genome which appear to contribute to resistance. The scientists haven't found many candidates, but they have found some. These few maize lines aren't suitable for the US agricultural system: they're too massive for the machines and are adapted to very different environments. What the GEM scientists hope to do is ingress the genomic regions identified as useful to pest resistance into the elite US hybrids.

So far, they have identified a number of mechanisms in the plants, all involving complex systems of genetic and environmental interaction and none apparently directly lethal to pests in the manner of man-made chemical pesticides or Bt toxins. For example, the 'ascorbate' biochemical pathway in plants produces a substance vital in the insect diet, but too much or too little can be damaging to them and suggests a possible way to compromise insect health; the pathway also has several potentially useful roles in strengthening and protecting plant tissues against pest attack. Larger or fast-growing root systems form other means of dealing with root-feeders. Emitting a chemical signal to attract animals which then parasite or feed on the pests has been known for some years [2]. Also previously known is that plants with nibbled leaves can produce substances in the roots which the pests down below avoid.

Comment: Does this mean the chemical war on pests waged by farmers above ground may be contributing to the war they're losing below ground?

The idea of the project is "when you know where the genes with these small effects are located, perhaps it is possible to bring them into one common genetic background. If we can accumulate these genes, over time we might increase the level of resistance so that it makes sense for farmers to grow (the new non-GM maize)".

This sounds like a better use of the science of genetics. If only we can ditch the fixation on artificial genes, "gene-editing", quick-fixes, patents, and the tiny number of crops currently considered desirable, we might achieve a sustainable food supply.