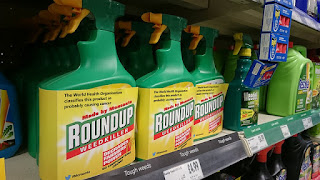 A US consumer survey in 2013 found that 71% of Americans were worried about pesticides in their food, and almost three out of four would like to eat food with fewer pesticides.

By 2014, a similar survey found pesticides had become a concern for 85% of American consumers, more than any other food-related issue. Pesticides are even higher on the list of concerns than GMOs, even although the two are inextricably bound together [1].

US Department of Agriculture (USDA) reports suggest consumers are right to be concerned. The Department routinely tests tens of thousands of samples for pesticide residues. In 2014, 59% of foods tested positive for pesticides. This sounds a lot, but one year later, testing found 85% of samples had detectable pesticides in them.

Regulators have been quick to dismiss these data because the pesticide levels were within their specified 'maximum residue levels' (MRLs).

However, this alone opens up another can of worms: many scientists take issue with the MRL as a safety standard. It's set using pesticide industry data and short-term exposure to single chemicals: the real-life situation is very different [2]. Also, chemicals with, for example, endocrine disrupting or genotoxic effects may have no safe level.

Glyphosate, the world's most used herbicide, has always been considered so safe it has never featured in USDA testing programmes.

In 2011, when concerns about the herbicide began to mount, the US Food and Drug Administration (FDA) responded by testing 300 soyabean samples. It found 90% of them contained glyphosate, but all were below the MRL and therefore declared nothing to worry about.

Regulatory complacency seemed to be set to change when, in 2015, glyphosate was reclassified by the World Health Organisation cancer-assessment body as a 'probable human carcinogen' [3]. The USDA was moved to carry out a limited glyphosate testing programme focusing on corn, soya, eggs and milk, with discussions about sugar-beet, pop-corn, wheat and other foods. This programme raised some alarm and ended in controversy and internal difficulties. The following year, the Department announced its intention to test corn syrup for glyphosate contamination between April to August this year. Corn syrup is a highly processed food product manufactured from corn now mostly genetically engineered to accumulate glyphosate.

Then, in January, the Department quietly deferred testing until an unspecified future date, and decided instead to test honey for over a hundred different pesticides, but not glyphosate.

To the cynical, this move could be seen as a politically-motivated diversion of attention away from the issues of GM food and the biotech industry.

It seems the truth is worse.

Despite over 40 years of escalating use of glyphosate in the fields, including directly on foods and on GM crops which absorb and accumulate it, and in public spaces, the US administration doesn't have a validated standard methodology for testing glyphosate. This means that different laboratories will find different levels of glyphosate in the same sample. Suddenly, that 'safe' MRL used to dismiss concerns about glyphosate in our food becomes a bit tenuous.

Interestingly, other forces are taking control of the situation. There's an NGO in America which is not only prepared to test for glyphosate using an independent, long-established analytical laboratory and a validated method, but is testing food products from the shelf, and giving US consumers what really want: certified, labelled, glyphosate-free food.

This initiative is being taken by The Detox Project, a "research and certification platform that brings awareness to the public by testing for toxic chemicals". It believes people have a right to know what toxic chemicals are in their bodies and in their food.


A lot of glyphosate residue free ('GR-free') food will also be GM-free. This dovetails nicely with the Non-GMO Project's certification scheme to meet the rising consumer demand for GM-free food [4].

It really is time that regulators and industry noticed that consumers don't want what they're being offered to eat: they want transparency and clean food, not high-tech produce with added non-food bits cloaked in secrecy.