A new GM maize with questions 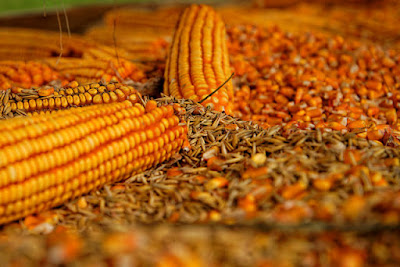 A summary of a scientific opinion on an entirely new GM maize was published by the European Food Safety Authority (EFSA) in 2015. Under scrutiny was Syngenta's Maize 5307 for food and feed use (not cultivation). The maize has two novel genes.

Even in summary form, the EFSA assessment raises some interesting questions.

Much of it is a repeat of what we've come to expect: measured differences in composition didn't require further safety assessment; measured differences in the grains, plant size and pollen maturation didn't give rise to concerns; noted potentials for toxicity and allergenicity of the novel proteins weren't of concern; risks to humans from horizontal transfer of the novel genes into gut microbes was "theoretical but unlikely" and received no further consideration.

However, because one of the novel proteins had not been "appropriately" tested, it was concluded that the assessment could not be completed.

Maize 5307 contains a re-invented Bt-type gene for an insecticidal protein. This seems to be based on two Bt genes/proteins cobbled together. Like all Bt proteins it's lethal to certain insects, but isn't guaranteed benign to other animals (including you) especially since it clearly has no natural counterpart. This indicates extensive rodent feeding studies on the new GM maize should be carried out as a matter of course. There is no suggestion of any such requirement from the EFSA.

Part of the 5307 Bt protein was found to have similarities to a potential toxin.

The test which Maize 5307 failed was a 28-day rat feeding study provided by Syngenta to support the safety of the Bt protein. It was deemed 'inappropriate' because it consisted of two experiments rolled together (bad science) and didn't use enough animals (it couldn't actually show anything). A broiler feeding study had unspecified 'weaknesses' in the study conduct (bad science) and reporting (poor communication?).

Maize 5307 also contains a 'PMI' selection marker gene to enable elimination of untransformed cells. PMI allows GM cells to survive in the presence of a type of sugar which, in most natural plant cells, gives rise to lethally toxic derivatives. When this selection technique was assessed in 2002, the PMI protein extracted from a bacterium was found to have no allergy-related parts in its structure. When the 'same' protein was assessed in relation to its formation in Maize 5307, it was found to have areas similar to a known allergen.

There's a discrepancy here which begs an awful lot of questions: What form of PMI protein is actually in the new GM maize? What kind of the protein was safety-tested, bacterial or plant? Were any of the previous safety studies carried out on a PMI protein actually relevant to the PMI in Maize 5307?

Why did a major biotech company think it could get away with presenting so much bad science to the EFSA? Had the Company done this, unchecked, before? Why were the rat data sets so short of animals that two experiments had to be combined, and even then the numbers per group were inadequate? Did the studies start off with the 'appropriate' numbers of animals, but lose so many in the course of 28 days that the science became invalid? Did the presence of a very novel Bt protein with toxic bits have anything to do with it?

The EFSA conclusion of 'no concern' regarding Maize 5307 allergenicity and toxicity must have had some scientific justification. However, factor in horizontal gene transfer. Evidence of horizontal gene transfer into microbes in the digestive system of livestock and humans, and throughout microbes in Chinese rivers, suggest the risk of artificial, possibly allergenic PMI genes plus possibly toxic Bt genes moving into your gut flora is not very "theoretical" and far from "unlikely".

If ever there was a case for long-term feeding studies on a GMO, Maize 5307 is definitely it.

Fortunately, Maize 5307 is nowhere near your plate, your gut microbes or your meat and dairy YET. Make sure it stays that way.