The GM debate - 'over', or barely started?

European Chief Scientific Officer, Anne Glover, and Mark Lynas, the 'voice' of Owen Paterson, our Environment Secretary, may be happy to announce that the GM debate is over, but the US Department of Agriculture (USDA) would give them an argument.
A review of GM crop-growing in America since 1996 has been prepared by the USDA economic Research Center (ERC).
The ERC noted that uptake of the three main GM crops (commodities soya, maize,and cotton) has been rapid, and that, as of 2013, nearly 8,000 field trials (mainly by biotech companies) were approved by the USDA. Reduction of the workload for farmers was identified as the key advantage of these crops.
Also observed was that “questions persist” in four major areas.

Returns to farmers are mixed.
GM seed costs have always been high, and increased 50% between 2001 and 2010 while the accompanying yield potentials have remained static.
'Bt' insecticide-generating crops have a reduced yield loss, but this is only useful in years of high pest-pressure. Environmental conditions, which are highly variable and unpredictable, are of more importance in determining yields than anything to do with the action of the novel DNA.
One of the biggest economic benefits of GM crops to farmers seems to be that the reduced workload allows diversification into lucrative non-agricultural ventures.
COMMENT US government subsidies for growing the big three GM commodity crops must be instrumental in stimulating both the noted level of uptake by farmers, and the type of R&D which is churning out so many new ones.

Environmental impacts are mixed. They are simply too local in nature and too complex for any clear conclusion to emerge.
COMMENT Put another way, the science hasn't been done.

The ERC notes that there has been an over-reliance on a single herbicide and a reduction in the diversity of weed management practice linked to GM crops (most of which have been genetically transformed to withstand one herbicide, glyphosate).
No stress is placed by the ERC on the scale of the problem, but in a survey in 2012, 49% of 3,000 US farmers reported they had weeds tolerant to the glyphosate on their land. This was up from 34% the previous year. While the ERC mentions 14 different weed species now resistant to glyphosate, others put the figure at 25.
COMMENT Clearly, weed resistance to the herbicide which is part-and-parcel of a majority of GM crops is a huge issue. Emerging resistance to glyphosate is steadily eroding the reduction in workload enjoyed by farmers in the early days of using GM crops, and must have a significant economic impact. Efforts to deal with resistant weeds must also have a detrimental environmental outcome, especially since the next generation of GM crops is being developed to withstand much more toxic herbicides than glyphosate.

Consumers in America are “largely unaware” of the GM food they are eating. In fact, the reviewers couldn't seem to find much else to observe.

There isn't much positive comment about GM crops in the ERC report. Their biggest boon seems to be that it allows farmers not to farm, at least in the short-term.
The GM debate won't be over until the American public has become fully aware of the GM content of their food, and has joined in.
Neither will the GM debate be over until all the safety issues repeatedly raised have been fully, and scientifically, investigated. In the words of Don Huber, Emeritus Professor of Plant Pathology:
“The wealth of literature documenting these health and safety concerns continues to grow while I know of no long-term safety studies that indicate that our current glyphosate herbicide practices or GMO toxins in feed and food are safe.”
As long as “questions persist”, the GM debate will remain alive and well. Make sure those questions aren't allowed to lie down until they have been answered. 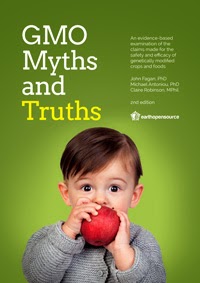 To help you, you might like to check out the newly released second edition of  'GMO Myths and truths'  (http://earthopensource.org/index.php/reports/gmo-myths-and-truths).

The new report is 330 pages, three times the length of the first edition. It documents the growth of evidence of harm in many new studies which have emerged in the two years since the original study.