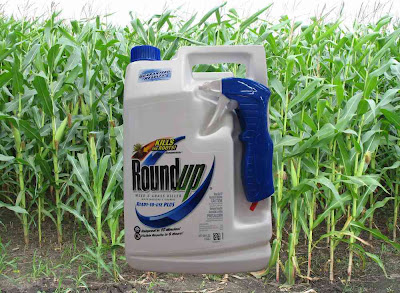 Headlines in May announced an important piece of research to come out of Scotland. It seems that low levels of the hormone, testosterone, are a risk factor for type 2 diabetes.

While it was previously recognised that low testosterone was linked to obesity, an Edinburgh team of scientists has found that the hormone deficiency link to diabetes is not, in fact, dependent on the amount of fat tissue.

People who keep up with GM affairs may have noticed increasing evidence that glyphosate herbicide, and particularly its commercial formulation, Roundup, are endocrine disruptors (see ROUNDUP ENDOCRINE DISRUPTOR - March 2012). A paper published in 2010 described a study of rats fed environmentally-relevant doses of Roundup over a period of 30 days spanning the onset of puberty. The results showed a reduced testosterone production sufficient to alter testicular cell morphology and to delay the onset of puberty.

Roundup's not the only endocrine disruptor in our environment, but it's one of the most widely used chemicals in the world, and is applied in domestic, agricultural and civic situations. It's found in the air, water and soil, and is used on many food crops just before harvest. Since the advent of GM Roundup-tolerant crops which accumulate the herbicide, it's increasingly present in staple foods and in the feed used to produce animal food products. Indeed, “All these could add up to rather a lot of chronic, low-level (but increasing) dietary exposure to this weed-killer” (see INFORMED CHOICE - March 2012).

The worldwide exponential increase in type 2 diabetes (366 million had been diagnosed in 2010 with more than half that number again thought to be undiagnosed) has matched our increasing exposure to Roundup in our surroundings and in our food. It's not likely to be the only cause, but the herbicide may well be “instrumental” in the onset of the condition.

Now, what are the chances that this research will lead to a withdrawal of Roundup from our environment and food?

Alternatively, what are the chances we'll find 'value-added' GM food on sale with added pomegranate genes to prevent diabetes?